Microsurgery uses powerful microscopes and tiny microsurgery instruments, needles, and sutures to perform surgery on structures that are too small to operate on using the naked eye. These include blood vessels, lymphatic vessels and nerves.

Microsurgery allows innovative transportation of whole 3D blocks of tissue around the body for reconstructive purposes such as breast, limb and head and neck reconstruction.

It may include hip or leg bones being used to recreate a jaw, thigh skin to cover an exposed bone fracture in the leg, or fat and skin to recreate a breast.

It allows transfer of a toe to replace a finger or reimplantation of amputated body parts such as fingers, limbs or ears.

Microsurgery also allows re-connection or re-routing of nerves to re-establish nerve connections to restore sensation or muscle movement; and lymphatic vessels or lymph nodes to drain the fluid from a fluid filled arm or leg.

Microsurgery is very different to laparoscopic surgery, which uses portals and cameras to see inside confined body cavities. 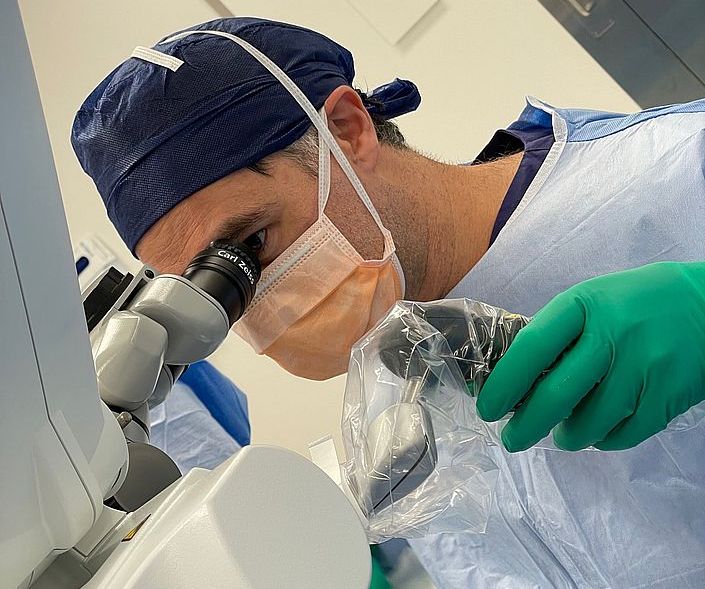 All members of the Brighton Plastic Surgery team are highly trained expert microsurgeons.

A/Prof Ramin Shayan trained under Mr Mutimer and other giants in the field of microsurgery before being appointed head of Australia’s leading microsurgery institute, the O’Brien Institute.

He undertook a PhD and was private surgical assistant to Professor Ian Taylor, the proponent of the world first microsurgical tissue transfer of groin skin to save a person’s leg, and creator of microsurgical bone transfer operations.

He also worked closely under the mentorship of his predecessor at the O’Brien Institute, Professor Wayne Morrison, in particular in the area of lymphatic microsurgery.

A/Prof Shayan has been an active member of the microsurgical teams at the Royal Melbourne, the Alfred and the St Vincent’s Hospitals.

He performs microsurgery for free tissue reconstruction of the breast, limbs and head and neck, and for lymphoedema, at the Cabrini (Brighton), Freemasons and St Vincent’s Private (Victorian Plastic Surgery Unit) Hospitals.

He has presented Australia’s largest series of lymphatic microsurgery, including in particular a series of over 400 lymphaticovenous anastomosis operations in both the upper and lower limbs, and for both primary and secondary lymphoedema.

She has a research and clinical interest in nerve and hand microsurgery.

All members of the Brighton Plastic Surgery team have extensive experience in hand microsurgery and re-implantation surgery following amputations of digits (fingers and toes) and are heavily involved in research and teaching in the areas of microsurgery.

The cost of microsurgery is dependent on your specific requirements and circumstances. We invite you to speak with our surgeons to discuss associated fees. In some cases Medicare or health fund rebates may apply.